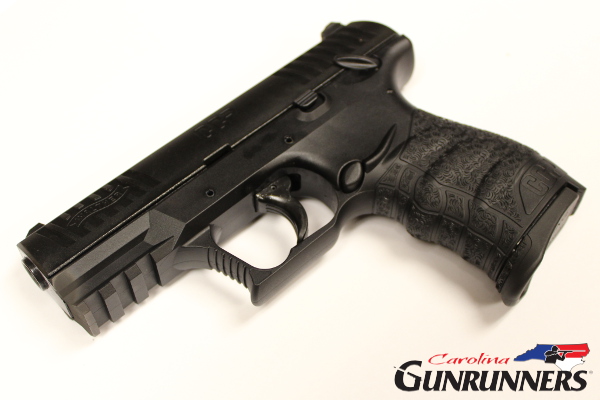 We’ve been really excited about the Walther CCP since it was announced in March of 2014. Since it’s announcement, we’ve been hounding our distributors to get us one so we could review it.

On paper, the CCP looks like a winner. It’s a single stack 9mm polymer framed pistol. It has 8+1 capacity, and the fantastic ergonomics we’ve come to expect from Walther.

The action of the CCP is very similar to the old HK P7 pistols. It has a fixed barrel, and a gas piston under the barrel that fills with gas from the chamber to delay the action opening when fired.

This video from Walther shows the piston operation:

At first glance you may think the Walther CCP is on par with pistols like the S&W Shield, Springfield Armory XDs, or Ruger LC9. We thought so too, but once the CCP arrived we found that it’s a little taller and longer than all of them, and bit thicker as well. It’s smaller than the Walther PPQ, but not as much smaller as we were expecting. The controls on the CCP are easy to reach, and easy to use. Most notably, the thumb safety is big enough to easily activate and deactivate for shooters with even the biggest hands (something that can’t be said for the S&W Shield and Ruger LC9). While the CCP is bigger than the other single stack 9mm pistols we are comparing it to, it’s not huge. It’s a nice size that makes it easy to shoot whether the shooter has large or small hands.

Field stripping the CCP proved to be tricky, even following the instructions in the owners manual. Taking it down requires inserting a special tool that comes with the pistol (or a screwdriver as mentioned in the owners manual) into the back of the slide while simultaneously pulling rearward and up on the slide. The slide then can be pulled off the front of the pistol.

Putting the CCP back together was even more troublesome. The recoil spring is placed around the barrel and then the you can start putting the slide back on. Before the slide can be pulled all the way back, the gas piston has to be lined up perfectly with the chamber. This took several minutes of wiggling until finally the piston made it into the chamber,and the slide could be pulled back and secured.

The CCP looks and feels nice, but unfortunately it doesn’t shoot as well as we were hoping. We took it to the range and ran 200 rounds of PMC 115gr 9mm ammo through it. During these 200 rounds, the CCP experienced a malfunction in just about every magazine fired. These malfunctions consisted of either a stovepipe, failure to feed, or a failure to eject.

This seemed exceptionally bad to us, so a couple days later we had another shooter take the CCP to the range with 100 rounds of Federal American Eagle 115gr ammo. The shooter fired three rounds through the CCP and then had a failure to extract malfunction. After stripping the magazine and clearing the malfunction the pistol would not feed another round from the magazine because the tip of the striker was protruding through the breech face and would interfere with the feeding.

Even worse though, the trigger on the CCP would not reset after this malfunction. Racking the slide over and over, and harder and harder had no effect. Finally, the shooter used the special takedown tool that comes with the CCP to field strip the gun on the range to see what the problem consisted of and everything inside seemed to be in the right place. Nothing looked broken, so we put it back together and lo and behold the trigger would reset again and the striker was no longer protruding through the breech face.  A magazine was inserted, and the shooter shot up the last 97 rounds of ammo without a single malfunction.

On one hand, it’s great that the CCP started running smoothly after 203 rounds were fired, but on the other hand the odd malfunction where the trigger wouldn’t reset until it was field stripped and put back together isn’t very confidence inspiring.

The CCP was acceptably accurate, especially for a pistol this size. Below are groups from 10, 15, and 20 yards.

Also, due to the gas piston system in the CCP, the pistol gets very hot after firing a few magazines from it in succession. The hottest part seemed to be the side of the frame where the shooters support hand thumb sits while shooting. It’s not a deal breaker, but if you’re planning on shooting a lot of ammo through the CCP each time you go to the range, it’s something to consider.

The Walther CCP is a nicely made pistol. The fit and finish is superb, it’s comfortable in the hand, comfortable to shoot, and the controls are easy to reach. It’s a bit bigger than many other single stack 9mm pistols on the market, but it’s a nice size for most shooters. We had some issues with malfunctions while shooting the CCP, so if you’re looking at one to use as a concealed carry firearm, you’ll want to make sure it is reliable with your ammo of choice.