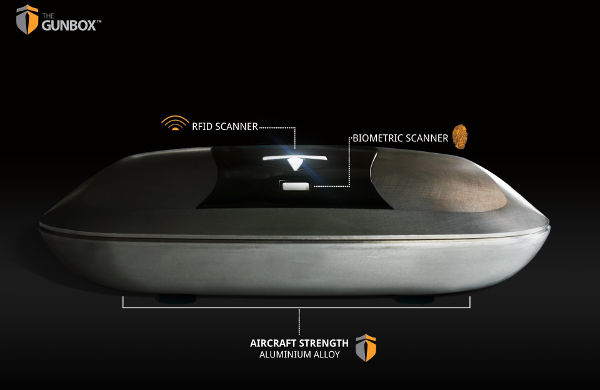 Storing a pistol for self defense can be a complicated situation for many gun owners. Many of us want to have a pistol ready to be used should the need arise but keeping it secure from children and visitors in our home is tricky. Locking the gun in a safe makes it tough to get to, and hiding it in a drawer makes it too easy for someone to find it who isn’t supposed to find it. At Carolina Gunrunners we get a lot of questions about different ways to secure a pistol. We’re very excited about a new product called “The Gun Box” and its innovative features including built in GPS, bio-metric, and RFID security.

We’ve been evaluating a Gun Box for about a month, and it’s everything that we hoped it would be!

Our first impression after opening up the box is that the Gun Box is hefty! It’s made from solid aluminum, and all of the edges are recessed so prying the box open would be tough. The first thing we noticed with The Gun Box is that it doesn’t have the key override that a lot of other fingerprint storage boxes have. When breaking into other boxes, most thieves go straight to the cheap lock on the other boxes and pick it to gain access to the storage box. The Gun Box doesn’t have this weakness. It operates on your fingerprint, an RFID tag, or both.

Programming the Gun Box to your fingerprint is as easy as opening it the first time with the provided RFID wristband, and hitting the “learning” button on the inside of the box. Once doing so you just have to put your finger tip on the sensor 3 times and it’s programmed to your finger.

The Gun Box also ships with two RFID tags to open the box in addition to the fingerprint:

Speaking of cell phones, The Gun Box also has two USB ports on the rear of it so you can use it to charge your phone. At first this seems like a gimmicky addition to a gun safe, but if you have two phones, plus the Gun Box to plug into one outlet, you will be out of space! This allows you to only have one plug plugged into the wall outlet, yet you can do everything that you need to do. It’s just one more little thing that goes to show how well thought out the Gun Box is.

On the inside of the box, you will find three switches:

The outside of The Gun Box also has an on/off switch so you can conserve battery life when the box is not plugged in. The advertised battery life is about 8 hours in the on position, and a couple of days when the box is switched off. From our testing, the battery lasts a bit longer than advertised. Leaving the box unplugged and turned on, it lasted 3 full days before the low battery alarm started to sound. The Gun Box also has GPS tracking, and the ability to notify the owner when the box is moved and alarming. This sends a text message to the owners phone when it has been moved, and a second message when it moves out of the “home base area” (which is about 100′). The second message will also include a link that when clicked will allow the owner to track the location of the Gun Box via a map and GPS.

In our testing, the Gun Box notification text messages would arrive in our phones within about 1 minute from the time the Gun Box was tampered with, and the GPS location and map showing where the Gun Box is located would be available within moments after it moved out of the home base area.

The Gun Box has a lot of features that some other gun storage boxes have, but to the best of our knowledge, there isn’t anything else out there that has all of these features in one package. We’ve received our first shipment today! To purchase give us a call or click here to visit our online store!