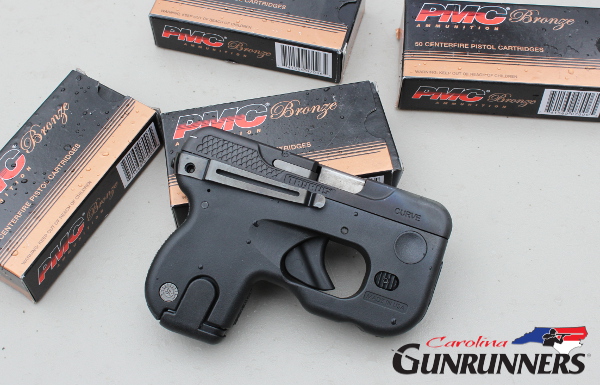 Late in 2014 Taurus surprised all of us with the announcement of a new pistol called the Curve. If the Curve is anything, it’s an innovative semi-automatic pistol that’s curved to fit your body while carrying concealed.

In addition to being curved, it also sports a built in LED light and laser, a complete lack of iron sights, and it comes with a minimalist holster that covers the trigger guard.

As usual, we packed up the Taurus Curve, targets, and ammo and headed off to the range. We began shooting the Curve, and much like it’s brother the Taurus TCP, it’s a surprisingly accurate pistol for it’s size. The trigger pull is long and heavy, but it’s fairly smooth and relatively easy to shoot once you get used to it. The switch that activates the laser and light is placed in front of the trigger guard. The switch is small and recessed a little bit into the side of the pistol. Activating the light or laser (depending on which of the three modes the pistol is in) is relatively easy. All you have to do is push the button forward to activate, and then push it forward again to deactivate. When using the laser on the Curve we encountered a strange issue where the laser would begin to fade out after a couple minutes and then when we fired the pistol the laser would come back on nice and bright. It’s possible that this was an issue with the battery in the Curve, but we didn’t have a spare to put in it on the range.

Not long after we began shooting the Curve, we decided to feel the re-set on the trigger. One round was fired, and then the trigger was slowly let out until a reset point was felt. The trigger was pulled again and it felt like the hammer dropped, but nothing happened. After that, the trigger went dead and wouldn’t do anything. It’s one thing for a pistol to have a false reset, but it’s something completely different (and a whole lot worse) for the Curve to have a false reset where pulling the trigger from there will basically render it inoperable until the round in the chamber is ejected. Towards the end of the range trip with the Curve, we ran 100 rounds through the pistol as fast as we could load the magazines, and this issue popped up once or twice when trying to shoot it fast.

The Taurus Curve was quite accurate, especially for a small subcompact concealed carry pistol. It’s not the easiest to shoot, but mechanically it’s very accurate. Below is a picture of a target shot at 7 yards while using the laser. We were able to replicate similar results on several other targets as well. For being a brand new micro sized pistol that hadn’t been shot before, the Curve was acceptably reliable. We had a handful of malfunctions, most of which were failures to eject, but they tapered off towards the end of the range session. The Curve lacks a magazine release, but the slide does lock back on an empty magazine… and sometimes in the middle of a magazine for no reason. This probably happened 4 or 5 times during our 200 round range session with the Curve. The part everyone is wondering about, “What’s it like to shoot a curved pistol”? Surprisingly, shooting the Curve is not all that different than a regular pistol. We shot the Taurus Curve right and left handed and it wasn’t that bad either way. That isn’t to say that the Curve is good for left handed shooters though, because the laser activation is on the right hand side, the mag release doesn’t work quite right when holding the pistol in the left hand, and it’s curved in the wrong direction for a lefty.

The body of the Curve is the only part of the pistol that is curved. The magazine and slide are straight. As mentioned above, the Taurus Curve lacks a slide release. When the slide locks back, the shooter just has to pull back on the slide and let it go in order for the slide to go into battery.

In addition to an absent slide release or a real magazine release, the Taurus Curve also does not have any iron sights. The rear of the slide has a couple lines etched into it that Taurus calls the “bore axis sighting system” and they say it’s for “instinctual point shooting at close distances”. In our opinion the lines did not help or hurt while shooting the Curve, they were just there. We did actually shoot it a bit without the laser, just trying to line up the slide and “point shoot” the pistol. At 7 yards it wasn’t too hard to shoot a group about the size of a cantaloupe. At the end of the day, the Taurus Curve is a very innovative little pistol. Having the built in light and laser, completely snag free design, and the curved frame that gives it it’s name are all cool things to have, but the Curve isn’t without it’s issues.

The biggest issue once again is the terrible false trigger reset that results in a light primer strike if the trigger is pulled before it fully resets. On a pistol meant for defensive concealed carry, this is something that should have been worked out in the design phase.

Hopefully the Curve will inspire other gun makers to innovate and try new, seemingly wacky things instead of just making new versions of the same old thing.

If you’re interested in a Taurus Curve, let us know!