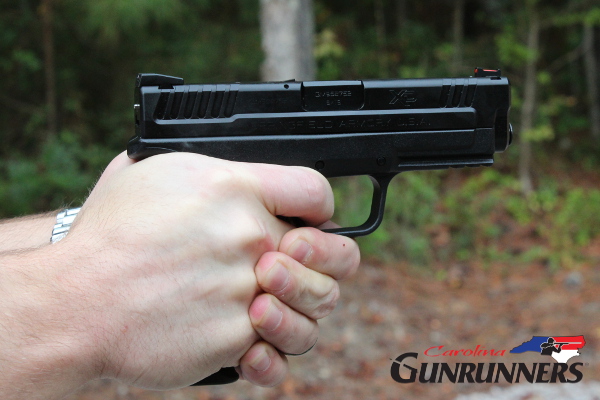 Last Friday we had a new gun show up in the shop that we weren’t expecting and honestly didn’t even know existed. As per usual when something cool and new comes out, we couldnt wait to get it out to the range to see how it shoots. The pistol in question is the Springfield Armory XD Mod.2 4” 9mm.

You might remember we reviewed the sub-compact version of this pistol when it first came out. Other than complaining about the “GRIP-ZONE” lettering on the grip and mismatched checkering on the magazine extension, we liked it.

Out of the Box: The controls are all standard XD. They are where you’d expect them to be and they work great. The Mod.2 4″ still has the ambidextrous magazine release like the other pistols in the XD line which is a really nice feature. Other pistols (Gen4 Glocks, S&W M&P’s, etc) require removal of the magazine release and re-installation in the opposite direction in order to work on the other side of the pistol. The XD Mod.2 has a magazine release button on both sides.

You might be asking what the difference is between the standard XD and the XD Mod.2. Here’s a general list:

As soon as we got to the range, we stuffed a few magazines with ammo and tried shooting some groups with the XD Mod.2 4″. The groups were respectable, but both shooters were hitting a bit high with the XD. It seems as though the sights on the Mod.2 4″ are set up for a 6 O’clock hold. To illustrate this, we did our best to take a picture of the sight picture used to take these shots. Turns out, it’s harder than it looks to get a perfect shot, but you’ll get the idea (sights centered, and lined up in the middle of the target): We also took the XD back to the 30 yard line and hit the steel plate target with it. Unlike some other pistols we’ve shot back at the 30 yard line, the XD was almost boring. Entire magazines of ammo fired and they all hit the target as expected.

We reviewed the Springfield XD Mod 2 4.0 9mm today. We’re running Bill Drills with the Mod 2 and the super sweet XD Gear holster that comes with it. Our review should be up next week. #carolinagunrunners #springfieldarmory #xdmod2 #9mm

A video posted by Carolina Gunrunners (@carolinagunrunners) on Sep 4, 2015 at 4:11pm PDT

We really liked the XD Mod.2 4″. It’s accurate (once we figured out the 6 0’clock hold), easy to shoot, comfortable, and reliable. What more can you ask for? If you’re looking for a full size 9mm in the $500 range, this is definitely one to consider.  If you’re interested in one, give us a call, or come by the shop.