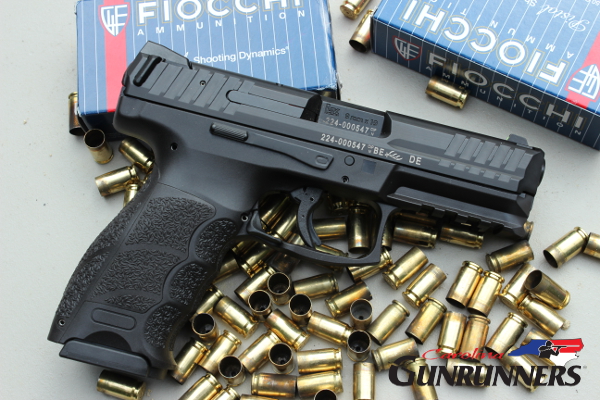 A couple weeks ago we talked about the new striker fired HK VP9 pistol. Just a few days ago, we received a shipment of these pistols and couldn’t wait to get one of them out to the range.

Just like the H&K P30, the gun looks and feels amazing. Everyone has been asking about the trigger pull on the VP9, and we’re happy to say that it’s very good. It has a short take up, a light-crisp break, and just a little bit of overtravel. When comparing the trigger to some other polymer striker fired pistols, we all agreed that the VP9′s trigger pull was better than a Glock 19, but not quite as nice as a Walther PPQ.

The VP9 that we reviewed shipped with luminescent sights. These aren’t traditional night sights, but rather 3-dot sights that glow after being exposed to another light source.

On the rear of the VP9′s slide is a cocking indicator that lets you know at a glance whether or not the pistol is cocked and ready to fire. When the red dot is showing inside the rear of the slide, the pistol is cocked, and when it disappears, it is not. The side of the extractor is also painted red to work as a loaded chamber indicator, in our opinion this was somewhat poorly executed. The red is visible when the chamber is empty, and only shows just a little bit more when the chamber has a round in it. In the picture below there was a round in the chamber, and the loaded chamber indicator isn’t big enough to inspire confidence that the pistol is in fact loaded/unloaded.

We grabbed 200 rounds of Fiocchi 115gr 9mm, and headed to the range with the new VP9. After a couple minutes of dry fire, we loaded up a magazine and fired it at 10 yards. The picture below is our second 10 round group.

After being impressed with the accuracy on paper, we set up the 6″x6″ piece of steel and walked back to the 30 yard line. This was easy for the VP9, so we then backed up to the 35, and 40 yard lines and still landed a majority of hits on the steel.

Throughout our test drive of the VP9, we fired two hundred rounds with zero malfunctions. It fed, fired, and ejected every round flawlessly. The only issue that we had was that the slide failed to lock back after firing the last round. After evaluating how the shooter was holding the pistol, we noticed his thumb may have been riding on the slide stop, so we can’t blame the VP9 for that.

The VP9 has fully ambidextrous controls with a magazine release and slide stop on both sides of the pistol. VP9 vs. The Competition:

We were most interested in getting the the VP9 up next to the Walther PPQ, which in our opinion, is the direct competition to the VP9. You’ll notice that the VP9 and PPQ are very similar in size and shape.

The other obvious 9mm pistol to compare the VP9 to is the Glock 19, since it has the same magazine capacity as the VP9 and the PPQ:

Favorite Part of the HK VP9:

Overall it’s an awesome pistol, but one thing stands out about it: reliability. It’s one of the best feeling guns on the market, it’s accurate, recoils softly, and looks great. We shot the pistol fast, slow, one-handed and with both hands. We shot it from several positions: slapping the trigger as fast as possible and the VP9 ate every round without an issue.

As mentioned above, the loaded chamber indicator on the side of the extractor is just too small to use confidently. The red paint is visible whether the pistol is loaded or empty, and when feeling it, there just isn’t enough difference between loaded and empty to be confident, but in our opinion, a gun owner should never rely on a loaded chamber indicator to determine if a gun is loaded or not.