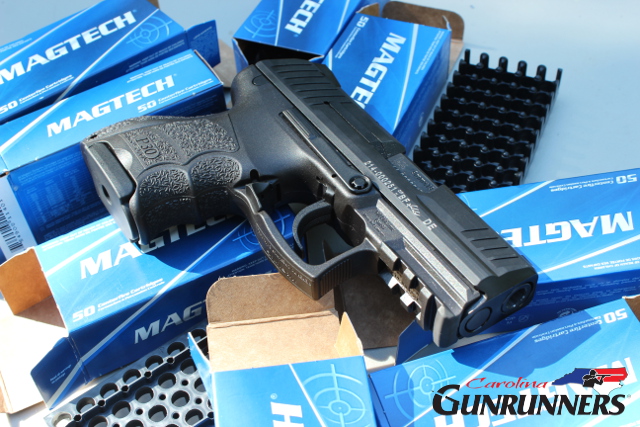 The HK P30 is one of those pistols that you just can’t help but love. Tons of grip options with the interchangeable back strap and side panels, two different trigger options, and the HK quality we’ve come to know and expect. There are only a couple of problems with the P30: The price is high and the pistol is larger than most people want to carry.

HK has now introduced the P30sk, a subcompact P30 at a much better price point. The P30sk is smaller than the standard P30, with a shorter grip and barrel, but all of the same HK quality. The particular P30sk that we used for this review had the HK LEM trigger, 10 round magazines, and phosphorescent (glow in the dark) 3-dot night sights.

We’ve received some feedback from readers of our previous reviews that they didn’t think we were shooting enough ammo through the guns we’ve been reviewing. So for this review we decided to double it and took 400 rounds to the range and shot every last round through the P30sk.

We found the LEM trigger to be very smooth and easy to shoot after getting a couple magazines through the pistol. The LEM trigger feels like a very well-tuned double action trigger. It’s long, but very smooth, and doesn’t stack as you pull it. The controls on the P30sk were standard P30 controls, with the ambidextrous slide release and magazine release, which is something not found on much of the competition.

Believe it or not, we did experience one malfunction with the P30sk while in the second half of the ammo that we brought. It turns out that shooting a bit more was beneficial in this case. Anyways, the malfunction was the failure to eject pictured below: Mechanically, the P30sk is a very accurate pistol, and it should be given the reputation that the P30 and HK have as a company. As we stretched out the distance past 30 yards, we did have a little trouble getting all of the shots to ring the steel target, but we attribute that more to the short sight radius than the actual accuracy of the pistol.

Here’s a video of Mike having a little trouble trying to get all of the rounds on the target at about 35 yards. Then, we stepped up to the 15 yard line for rapid fire:

Here’s the first magazine we shot through the pistol at 7 yards. Although just a little high, it’s still a nice group. First magazine shot through the P30sk at 7 yards.

Next we backed up to 10 yards to shoot another magazine. The P30sk still held a tight group. How’s it stack up against the competition?

We compared the P30sk to the S&W M&P 9mm Compact, the FN FNS 9mm Compact, and the Glock 26; as these are the most comparable pistols to the P30sk in size and capacity. The HK P30sk is everything we would expect from an HK pistol. It just works. The trigger is buttery smooth, the controls are placed well, it’s priced considerably lower than the standard P30, and it’s customizable to fit about any hand left or right. The only thing we’re left wondering is: Is this pistol a pre-cursor to a VP9 compact?