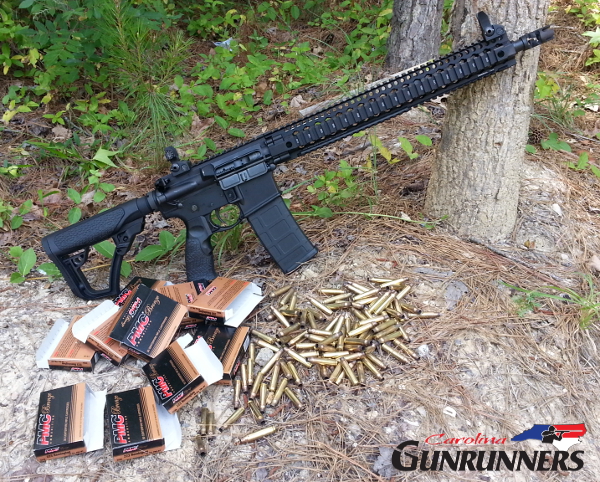 In the decade since the federal “assault weapons” ban sunset in 2004, we’ve seen many AR-15 manufacturers come and go. With so many companies making AR-15 pattern rifles these days, it’s hard for a company or a particular rifle to stand out. At Carolina Gunrunners we’ve been very impressed with the Daniel Defense line of rifles over the past several years and the new Daniel Defense DDM4 V9 is no exception.

The Daniel Defense DDM4 V9 has a great look. The finish and parts have the same uniform even black coating, unlike some rifles that have varying colors and finishes. There are no machine or tool marks and the laser etching on the upper receiver and quad rail are even, consistent, and attractive.

The main feature of the DDM4 V9 that sets it apart from the rest of the DDM4 line of rifles is the 15″ quad rail that runs nearly the full length of the barrel. When we first picked up the DDM4 V9 we expected it to be quite muzzle heavy given the long quad rail. Surprisingly the rifle balances nicely, with the balance point being just forward of the front take-down pin. The Daniel Defense DDM4 15″ rail is a single piece of aluminum, and it is pretty impressive to look at.

The DDM4 V9 features a 16″ cold hammer forged barrel topped off with a Daniel Defense brand flash suppressor. The barrel also has a mid-length gas port combined with the H buffer, resulting in a very soft shooting rifle.

In the past, many Daniel Defense rifles have worn Magpul brand furniture, but in 2014 Daniel Defense has come out with their own furniture making the rifle 100% their own without sacrificing the level of quality you would get from Magpul. The DDM4 V9 ships with the new Daniel Defense “soft touch” butt stock, pistol grip, and forward grip. The butt stock has a nice look and grips the receiver extension (buffer tube) tightly without any play. The top of the butt stock where you place your cheek has a textured rubbery piece that aids in obtaining a good cheek weld over a hard plastic stock. In addition to being adjustable for length of pull on the receiver extension, the butt stock also ships with an extension that can be added to it to make it even longer. The Daniel Defense brand pistol grip has a built in trigger guard, and the pistol grip and forward grip have the same “soft touch” rubber inserts as the butt stock that aid with grip.

When it comes to using the Daniel Defense DDM4 V9, everything works just like your standard AR-15. The take-down pins slide into place with a snap from the detents, and then they slide back out without any trouble. The DDM4 V9 has a single sided safety lever which also snaps into safe and fire with a nice click. As mentioned above, the butt stock adjusts easily from one end of the receiver extension to the other without any trouble.

We grabbed the Daniel Defense DDm4 V9 and 200 rounds of PMC Bronze 55gr .223 ammo and headed off to the range. We bolted on a set of Troy flip up sights and spent a few rounds zeroing them at 25 yards. The DDM4 V9 has a midlength gas system which made the recoil impulse on the rifle very soft. Follow-up shots came quickly and the rifle would shoot just as fast as we could pull the trigger.

The “soft touch” rubber on the buttstock was great while shooting the rifle. Initially we were a little concerned that the rubber would be too sticky and may pull at facial hair when shooting, but it appears that Daniel Defense got this just right in that the rubber is soft enough to aid in getting a good cheek weld, but hard enough that it doesn’t grab or pull at the shooters face.

We didn’t bolt on an optic and stretch the DDM4 V9 out accuracy wise, but putting several rounds through a single ragged hole at 25 yards wasn’t a problem using a table as a rest. We did test the rifle with many of the popular magazines on the market, the standard USGI aluminum 30rd magazine, H&K steel 30rd, Colt slant bottom 20rd, and the gold standard Gen2 30rd Magpul PMAG. All of the magazines functioned great, but we did experience one malfunction with the PMAG. After loading a partially full PMAG into the rifle with the bolt closed the top two rounds got bumped out of place in the magazine, and the bolt then failed to strip the top round out and chamber it. After pulling out the magazine, fixing the rounds, and re-inserting it, the rifle stripped the rounds and fired all of them without issue.

Favorite Part of the DDM4 V9:

After shooting the 200 rounds through the DDM4 V9, our favorite thing was the consistency of it. With the exception of the magazine issue mentioned above (which we’re inclined to blame on human error) the rifle was so reliable, it was almost boring! When standing in one place, all of the brass would get thrown out of the rifle into a consistent pile on the ground at about 4 o’clock from the ejection port.

Everything about the DDM4 V9 is consistent, from the laser etching, to the trigger pull, recoil, accuracy, etc. It’s really a lot of fun to shoot!

We had to nitpick to come up with something that we didn’t like about the DDM4 V9, but if we had to pick something, it would be that once the rail gets really hot from shooting it takes a long time to cool off. There is a lot of aluminum in the rail, so it takes a good bit of shooting to get it hot, but once it’s hot, it definitely needs a breather to cool off.

All in all, the Daniel Defense DDM4 V9 is a fantastic rifle, and it’s everything that we’ve come to expect from Daniel Defense. The new Daniel Defense brand furniture is really good, and even with the 15″ quad rail, the rifle balances nicely. If you’re interested in a DDM4 V9, or any other Daniel Defense rifle look no further than Carolina Gunrunners!