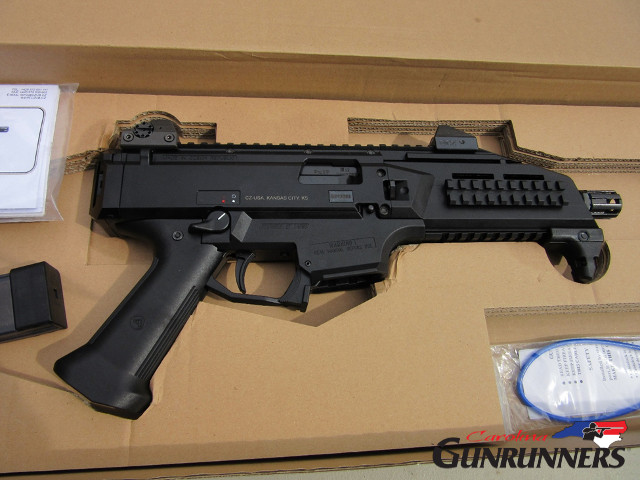 CZ announced plans for the importation of the Scorpion EVO 3 S1 Pistol in late 2014 and we have been wanting to get our hands on this pistol since then. We were excited when the pistols became available in March and we finally had the opportunity to evaluate and test one.

The CZ Scorpion arrived factory packaged in a rather subdued cardboard box. The pistol is packaged with 2 polymer 20 round magazines, a sight adjustment tool, a bore snake type cleaning tool, an owner’s manual, a digital copy of the factory 5 round test target and a gun lock.

The Scorpion is 16” in overall length with a 7 ¾” barrel and flash hider. It weighs in at 5 pounds which is typical for this class of pistol. It comes equipped with an ambidextrous safety, magazine release and sling attachment points. The Scorpion utilizes a very user friendly, non-reciprocation charging handle located on the left side and functions similar to the MP5 charging handle. A non-ambidextrous bolt release is also located on the left side. The magazine well is flared and beveled to help facilitate rapid magazine changes. The right side ejection port is oversized and positioned above the sling attachment points to ensure positive function for left handed shooters using two point slings. The Scorpion comes equipped with a total of 4 Picatinny rails. A set of adjustable iron sights ride on the 11” Picatinny top rail. The rear iron sight allows the user to select from 4 apertures depending on range. CZ fits a hand stop to the lower rail to help with proper positioning of the support hand and keep it clear of the muzzle. The side rails are mounted close to keep the width of the pistol to 2.4”. The pistol grip has minimal checkering and incorporates a substantial flare at the base. It is also important to note that the lack of checkering on the grip could be a problem with wet or sweaty hands and the grip might be a candidate for adhesive grip panels.

The Scorpion Evo 3 S1 has good ergonomics with the controls easily manipulated by average size hands. The safety has a very positive engagement. However, as previous reviews have noted, the safety utilizes oversized levers, which have a tendency to dig into the strong side hand. The trigger has a long take up and long reset, but the trigger breaks cleanly, which is why we would rate this as one of the better triggers we have experienced for this class of pistol.

We performed our quick safety and function checks as well as some dry firing to familiarize ourselves with the controls and get a feel for the Scorpion. We then proceeded to shoot it as it was delivered from the factory without the benefit of any cleaning or additional lubrication. We ran a total of 230 rounds of the PMC 115 Grs. FMJ through the Scorpion. While our test window at the range limited us to a relatively low round count it should be noted that the Scorpion performed flawlessly without a single issue.

CZ provides 2 transparent polymer 20 round magazines with the pistol (30 round magazines should be available soon). During testing we noted that the magazines were of good quality, well made, and the staggered feed allowed for easy loading.

We had the opportunity to test the Scorpion EVO 3 S1 at ranges of 10, 15 and 50 yards. The pistol had minimum recoil with minimum muzzle rise and is extremely controllable prompting one reviewer to compare the recoil to that of a .22 LR pistol. The pistol performed well at all ranges. However, it should be noted that our ability to extract the accuracy immediately improved as soon as we added a two-point sling and EOTech.

We also tested accuracy using the EOTech and a sandbag at 15 and 50 yards to see what the pistol was really capable of:

Here is a short video from the range.

We also performed some velocity testing to see how the 7 ¾” barrel stacked up against the Glock 19 with a 4 inch barrel.

We did note two considerations with the EOTech. In the picture below you will see that we initially mounted the EOTech about midway on the rail. In retrospect, we should have mounted it closer to the rear sight so as not to interfere with operation of the charging handle. We also noted that the EOTech introduces a significant height over bore issue which must be compensated for in close quarters situations. The CZ Scorpion EVO 3 S1 is a well-rounded pistol with excellent ergonomics, accuracy and reliability. The pistol has an exotic appearance and will receive a fair share of attention at the range. The CZ has a high fun factor when equipped with a sling and optic.

The CZ reminds us of the MP5 in the way it handles and functions and is considerably more refined than the UZI or 9MM AR based pistols. With an MSRP of $849 the CZ is priced well below many of the competing pistols in this class including the venerable HK MP5 and the yet to be released Sig MPX.

If you are in the market for this class of pistol, the CZ Scorpion EVO 3 S1 warrants serious consideration.