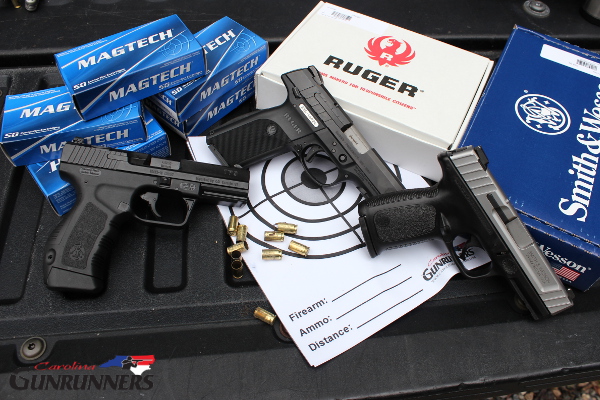 When it comes to handguns, there are literally hundreds of options to choose from, and there are handguns available for most any price range. It’s generally accepted that spending somewhere around $500-$600 on a handgun will net you a pretty good handgun that is reliable and accurate.

But what about the less expensive handguns? We’re starting to see more options in the $350 range, and we thought it would be fun to take a few of these handguns to the range and see how they shoot.

After a bit of conversation regarding our options, several of us in the shop decided on the three handguns that we would shoot: S&W SD9VE, Ruger 9E, and Canik TP9. The Smith & Wesson SD9VE is the latest iteration of the S&W Sigma pistol. It sports 3-dot sights, a polymer frame, and (2) 16 round magazines. The pistol feels fairly ergonomic in the hand, and the slide release is easy to reach. The trigger on the SD9VE is heavy, and stacks as it’s pulled, but is smooth, and consistent from shot to shot. The Ruger 9E is the newest version of the already bargain priced Ruger SR9. Ruger reduced the amount of tooling required to produce this model, therefore reducing the price to the $350 range. The 9E ships with one 17 round magazine, ambidextrous magazine release and safety, 3-dot sights, and a changeable rubber grip insert. The TP9 is the black sheep of the pistols we selected. This is a polymer framed 9mm pistol manufactured in Turkey. The TP9 has a trigger mechanism that allows the shooter to shoot the first shot with a traditional double-action trigger pull, and once the striker is cocked, the next shots can be fired from a lighter trigger pull. The shooter can then pre-set the sear by pulling the trigger halfway and then letting off, which then allows for an even lighter, shorter trigger pull. To re-set the pistol to the long double action pull, the shooter can push a button located on the top of the slide which works as a decocker.

Going into this we were biased towards the Ruger 9E. It sports the most features, and is arguably the best looking pistol of the bunch.

We started on the range dry firing and getting familiar with all of the features of the different pistols. While doing so with the Canik TP9 we pushed the button on the slide to reset the pistol into the double-action mode, and the trigger went limp. After field stripping the pistol, and having a look at the inside we determined that the trigger spring had come off of the trigger bar. Using a Leatherman tool we were able to put the spring back in place, and the pistol seemed to be working again.

We loaded up the magazines for each pistol and began to shoot them at 10 yards for accuracy.

The S&W SD9VE was very accurate at 10 yards. The pistol did have a failure to extract on the second round fired, but it made it through the rest of the day without a single issue. The Ruger 9E also shot well at 10 yards with no malfunctions to speak of.

After shooting the S&W and the Ruger, we were excited to shoot the Canik TP9 since neither of us had any experience with the pistol. The magazine was inserted, and the pistol charged. Two rounds were fired before the trigger went limp again, just like it had before. After unloading the pistol, we had some trouble getting it field stripped so it could be inspected. Several minutes later we were able to remove the slide to find that the trigger spring that had popped off of the trigger bar previously had broken, rendering the Canik TP9 unusable. This was disappointing to say the least, and it took the TP9 out of the running with just two rounds fired.

After shooting at the 10 yard line, we moved back to 20, and then 30 yards shooting a piece of 6″x6″ steel. These further distances helped to set the remaining two pistols apart. The actual group sizes at the maximum are about the same size, but the S&W SD9VE grouped more shots tighter, and the Ruger 9E spread the shots out a bit more:

The S&W SD9VE’s sights remained point of aim/point of impact all the way back to 30 yards, but even at 20 yards the Ruger 9E began to shoot high, causing us to have to aim well below the target to achieve a hit on the steel. You’ll notice that the 20 yard target for the 9E has the rounds spread pretty evenly all around the bullseye, whereas the SD9VE groups them a bit more consistently on the same part of the target.

At 30 yards, we were able to achieve 7 of 10 shots on the small steel plate with the SD9VE consistently. The SD9VE’s trigger is long and heavy, and it stacks quite a bit before the break point, but it does have one advantage over the Ruger: It’s consistent.

Unfortunately for the Ruger, it did not have the accuracy to achieve consistent hits on the steel target at that distance, even when compensating for the sights that were shooting high. At 20 yards the Ruger 9E’s rounds impacted all around the bullseye, and at 30 yards this was exaggerated even more. The trigger on the Ruger is lighter and shorter than the S&W. However, the ruger has a considerable amount of grit which makes it much more inconsistent from shot to shot.

Both pistols were very reliable, but in the end the primary job of a pistol is to put bullets where they’re aimed. The S&W SD9VE is much more accurate beyond the 10 yard line and has a much more consistent trigger pull. For that, the S&W SD9VE is the winner of the shootout. We ran a giveaway from the time this shootout was posted through October 15, 2014 where readers could enter by picking a random number between 1 and 10,000. Zach was the lucky winner with his pick of 2182. Congratulations Zach!