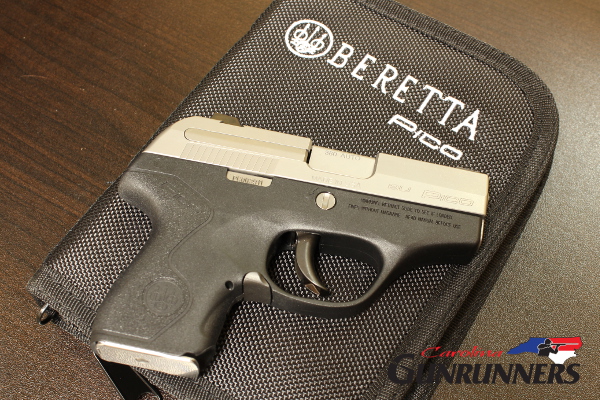 Nearly 2 years ago at the 2013 SHOT Shot Show in Las Vegas, Beretta announced they would be getting into the .380ACP pocket pistol game with a small pistol called the Beretta Pico. After the initial announcement of the pistol, we forgot about it for a while, and it wasn’t until November of 2014 that Beretta began to ship Pico pistols out to stores.

The Pico offers 6+1 capacity, a double-action only trigger that is also double-strike capable, and sports real sights instead of just having bumps on the slide like the Ruger LCP. The Pico ships with two 6 round magazines, one has a rather large extension on the bottom of it which helps to get an additional finger on the small grip.

We took the Pico to the range and shot 200 rounds of Blazer .380 FMJ through it. We had two shooters shoot the Pico; one with small to normal sized hands and one with much bigger hands. This is important because the grip on the Pico is one of the smallest grips we’ve seen, even on small .380 pocket pistols. Interestingly enough, every malfunction that happened with the Pico took place while the shooter with the larger hands was shooting the Pico, and functioned flawlessly when the smaller handed shooter was shooting. The Pico had two types of malfunctions: stovepipes and failures to feed. The first stovepipe happened on the 13th round fired through the pistol, and the rest took place randomly through the rest of our shooting test.

The slide serrations on the Pico are very slight and when attempting to rack a round into the chamber for the first time we struggled to even get the slide pulled back. However, after firing a couple of magazines this eased up and it wasn’t a problem.

Some of the other .380ACP pocket pistols on the market have awful, snappy recoil that makes them painful to shoot after a little while. Going into this review we expected the Pico’s recoil to be nasty given its small size, but surprisingly it really wasn’t bad. It’s not comfortable to shoot like a full-size pistol, but it’s not uncomfortable or painful to shoot. At the end of the review we ran 100 rounds through the Pico just as fast as we could load the magazines, and neither shooter experienced discomfort from the recoil. The Beretta Pico is quite accurate, but the trigger pull is long and heavy and it seems to stack (get heavier) as you pull it. This makes the Pico hard to shoot accurately, although mechanically, it’s very accurate. The sights on the Pico also help in shooting it accurately, which is a big advantage that the Pico has over some of the other pistols in its class, like the Ruger LCP and Taurus TCP.

The target to the right shows several magazines shot through the Pico at 7, 10, and 15 yards. The group sizes are each of these distances were all about the same.

We took the Pico back as far as 25 yards shooting at a piece of 6″ steel. At 15 yards we achieved 100% of hits on the steel target and at 25 yards the accuracy dropped off a bit, getting about 50% of the hits on the steel.

When it comes to small .380ACP pocket pistols, the Beretta Pico is one of the smallest out there. Below are some comparison pictures with the Pico next to a few of the other popular choices on the market today:

The Beretta Pico has a few qualities that are frustrating when you first pick it up. The grip is very small, the magazine release is stiff, and the slide release is almost non-usable when attempting to chamber a round. After shooting the gun, we realized that the small grip doesn’t inhibit the shooter from firing accurately (even without the extended magazine), the magazine release is fairly easy to get used to, and when chambering a round there is no need for the slide release. Just like many other .380ACP pocket pistols, it has a heavy trigger that will take a few rounds of dry-firing to get used to. Once you have figured out where to place your trigger finger it is very easy to shoot the Pico accurately.

Overall this is a very solid pocket pistol that is accurate and has manageable recoil. If you’re interested in purchasing one of these please send us an email at info@carolinagunrunners.com or give us a call (919) 803-4605.