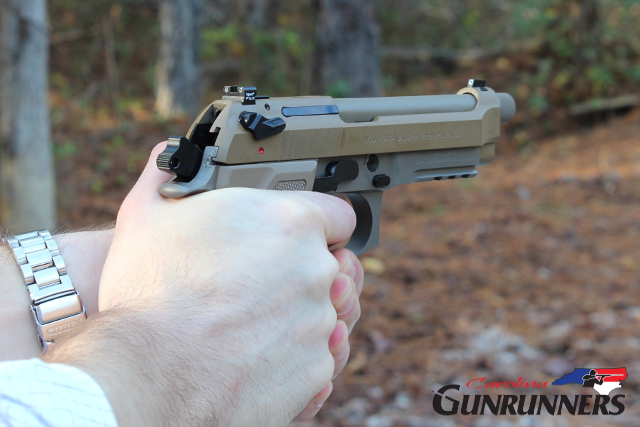 The original Beretta M9 has a 30 year history with the U.S. Army and Navy, being the standard issue sidearm since the M1911 was phased out in 1986. The M9 is a no-frills, Department of Defense owned design that weighs reliability against budget. The Beretta M9A3 features a design that takes the M9 and refines it, giving attention to its combat heritage. We took one out to the range, and found it to be a fantastic pistol. New features include: a threaded barrel, 17 round magazines, 3 slot Picatinny rail, thinner vertical grip, removable wrap-around grip, removable sights, universal slide, and sand-resistant magazine. The first thing you’ll notice about the Beretta M9A3 is that it’s a very colorful pistol. The frame is a greenish color, the slide is standard flat dark earth, and the barrel, grips, and magazines are each a little different shade of flat dark earth. Aesthetics aside, the lighter earth tones keep the temperature of the gun down, making it easier to handle in warmer, sunnier weather. The M9A3 ships in a container that’s similar to an ammo can with inserts that hold the pistol and magazines. The M9A3 ships with 3 magazines, which are all coated in a sand-resistant, flat-dark-earth coating that goes along with the color scheme of the pistol. The mags each hold 17 rounds, and seating a full magazine in the pistol with the slide closed isn’t a problem.

The sights on the M9A3 are pretty good. They are a 3-dot night sight setup, and the rings around the tritium vials in the rear sight provide a good sight picture without being obstructive. It’s a good shooter with the factory sights. Now, on to the down side of the M9A3: Beretta kept the safety/decocker next to the slide where it’s always been on the M9/92 series pistols, and it’s really an awkward location. The safety pulls downward and decocks the pistol when engaged. The safety isn’t easy to reach on the slide, and pushing the safety upward during a draw stroke resists your thumb’s natural movement. The good news is that the M9A3 does accept a Beretta “G” lever which would eliminate the safety, making it decocker-only.

We did have one failure to feed with the M9A3. A round fed most of the way into the chamber, and then stopped, leaving the pistol slightly out of battery. After clearing the jam, we expected it to be deformed. It wasn’t, and it dropped into the chamber without any problem. We loaded it into the top of the magazine and fired it without issue.

The Beretta M9A3 just shoots great. As mentioned above, it has a phenomenal single action trigger that is really easy to shoot accurately, and fast. To give you a better idea of the group sizes, we are using a target printed on an 8 1/2″ x 11″ piece of paper. We could quibble over some of the little things with the M9A3, like the safety lever not being to our liking, but what really stands out about the M9A3 is the quality of the workmanship of  the pistol. There’s not a tool mark to be found on it, the stippling on the front strap is sharp, and perfect, and the little things like that really make it stand out. The Beretta M9A3 retails for $1,100 and will realistically sell for somewhere between $950-1,000.

If you’re interested in an M9A3, stop by the shop and have a look at one!